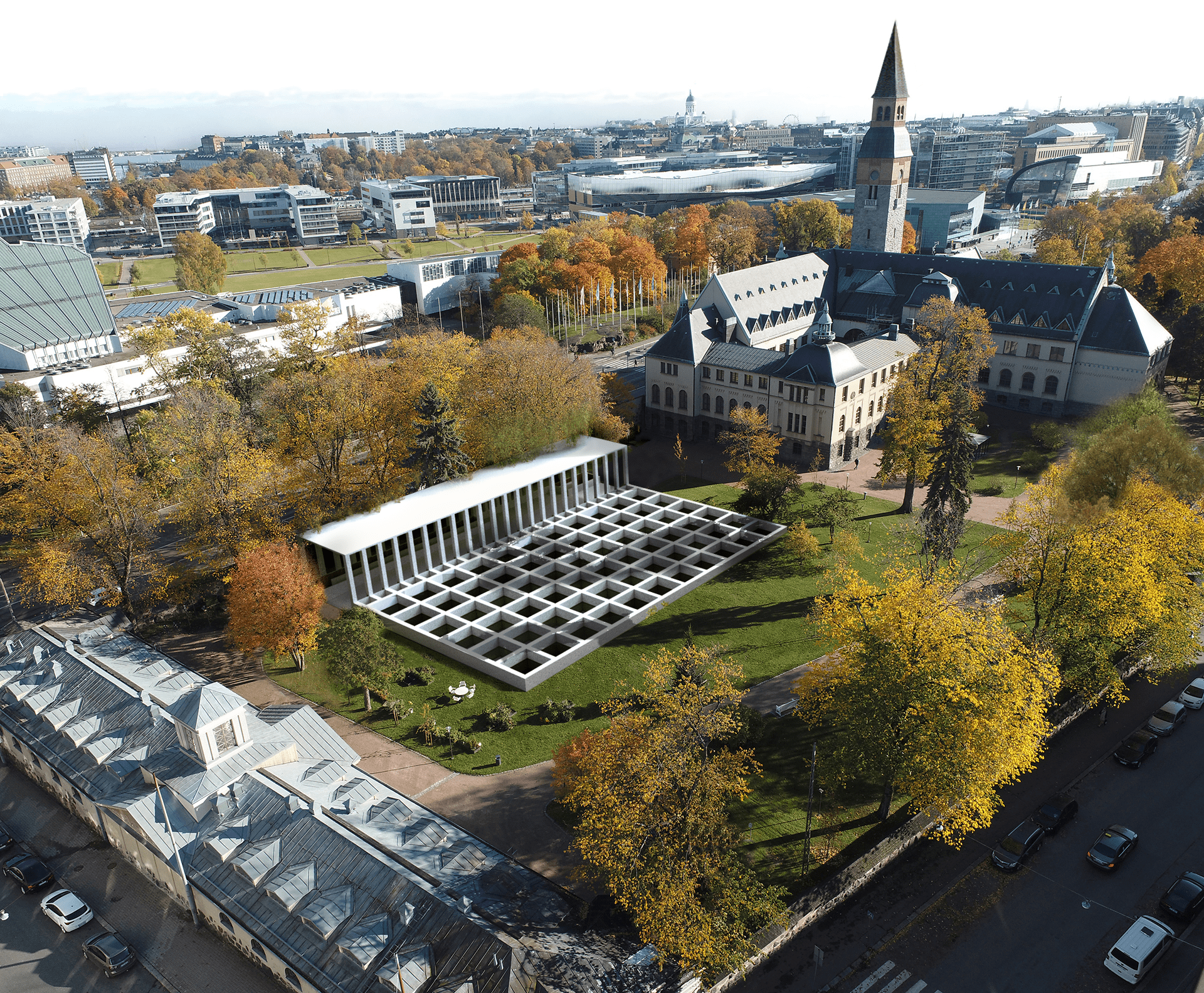 Heavy wooden doors open and close, each time letting a bit of light escape into the foyer, this in turn allows for a small glimpse of what lies just beyond.

The alignment to the Kansallismuseo, both functional and spatial, reveals hidden ways in which the higher values of the past could be used in order to build the present. Medieval in inspiration, the museum highlights the intimate relationship between the courtyards (a recess of space) and the chambers that gravitate around them. The Annex, settled in an equidistant, reverent dialog with the Kansalismuseo, learns from its olden neighbor and highlights the important ordering effect of a recessed space. The hidden quality of the Annex is visible in its discreet positioning towards the row of trees that flanks Mannerhemintie streets. In this way, the museum’s courtyard park is open to receive multiple possibilities of existence (from outdoor exhibitions and receptions to just be a reminder of the original courtyard design). 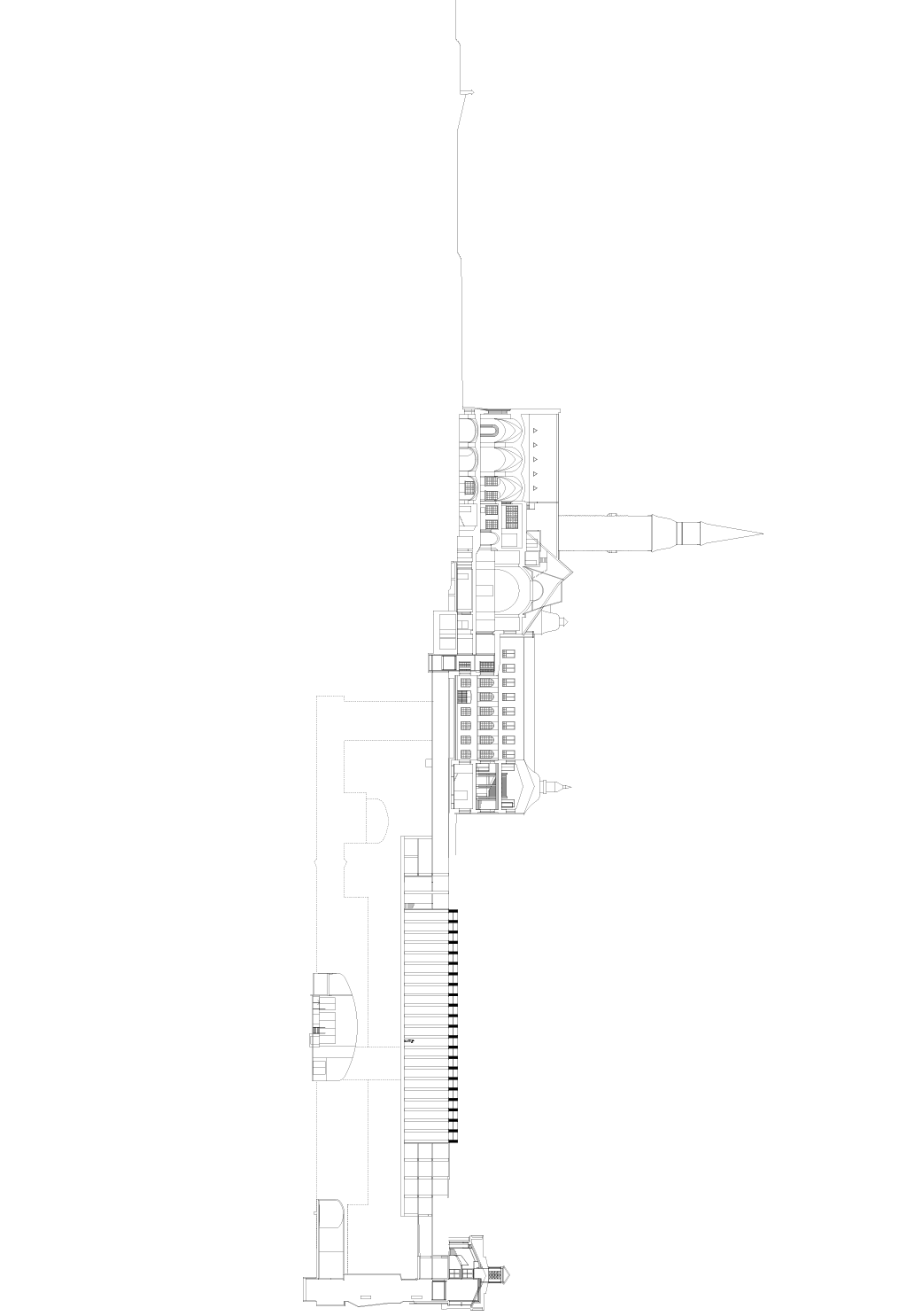 The entrance into the Annex is made through a covered terrace, an extension of both the new building and the courtyard park. The rhythmic repetition of columns and the rows of wooden seats reminds us of a medieval cathedral, one of Kansallismuseo’s inspirations. The terrace seemingly flows underground where two heavy wooden doors reveal the inner-workings of the Annex. 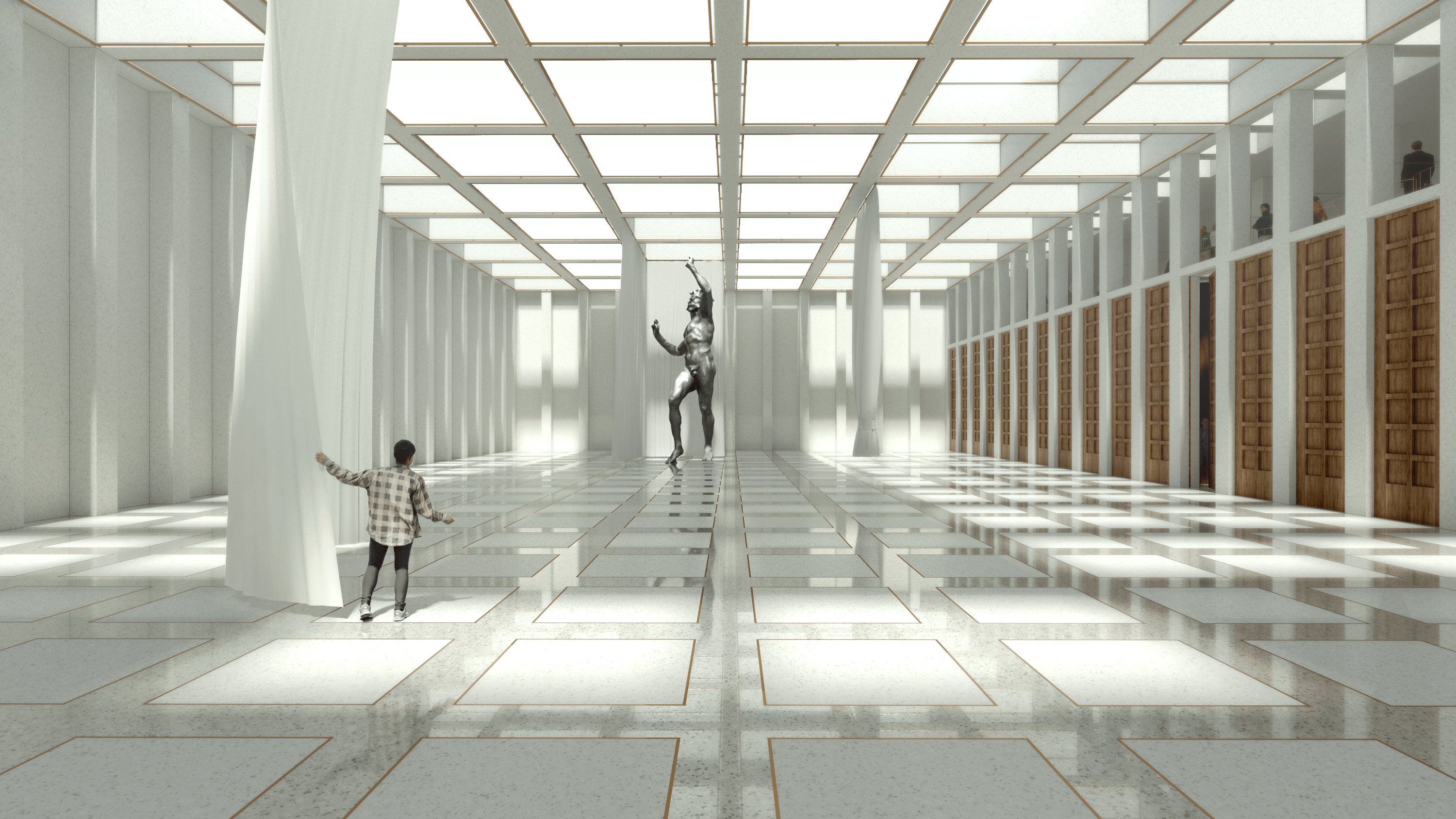 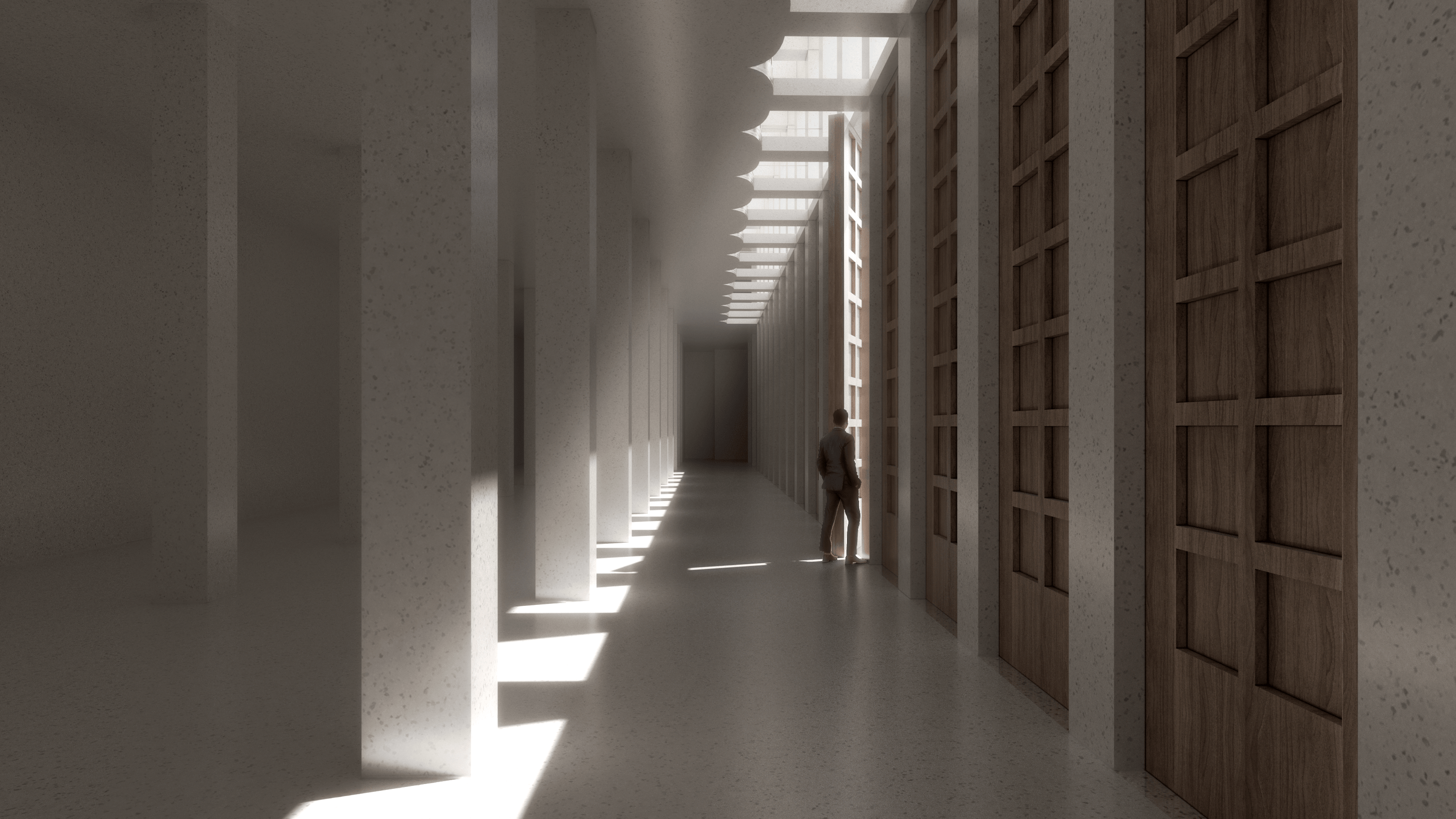 Once entered, the striking endlessness of the saloon becomes apparent. The close ceiling and dim light gives it an intimate, almost confidential character. Tables and chairs can be placed here and a restaurant and bar can find its place with ease. Just like a bridge, the funneled space, spans the museum and the annex. Acting as an extension of the restaurant, it is also the place where the cloakroom and the museum shop are found. At its end, an elevator goes up two levels into the museum (stopping at the Cafeteria and the Exhibition zone near the main entrance foyer). 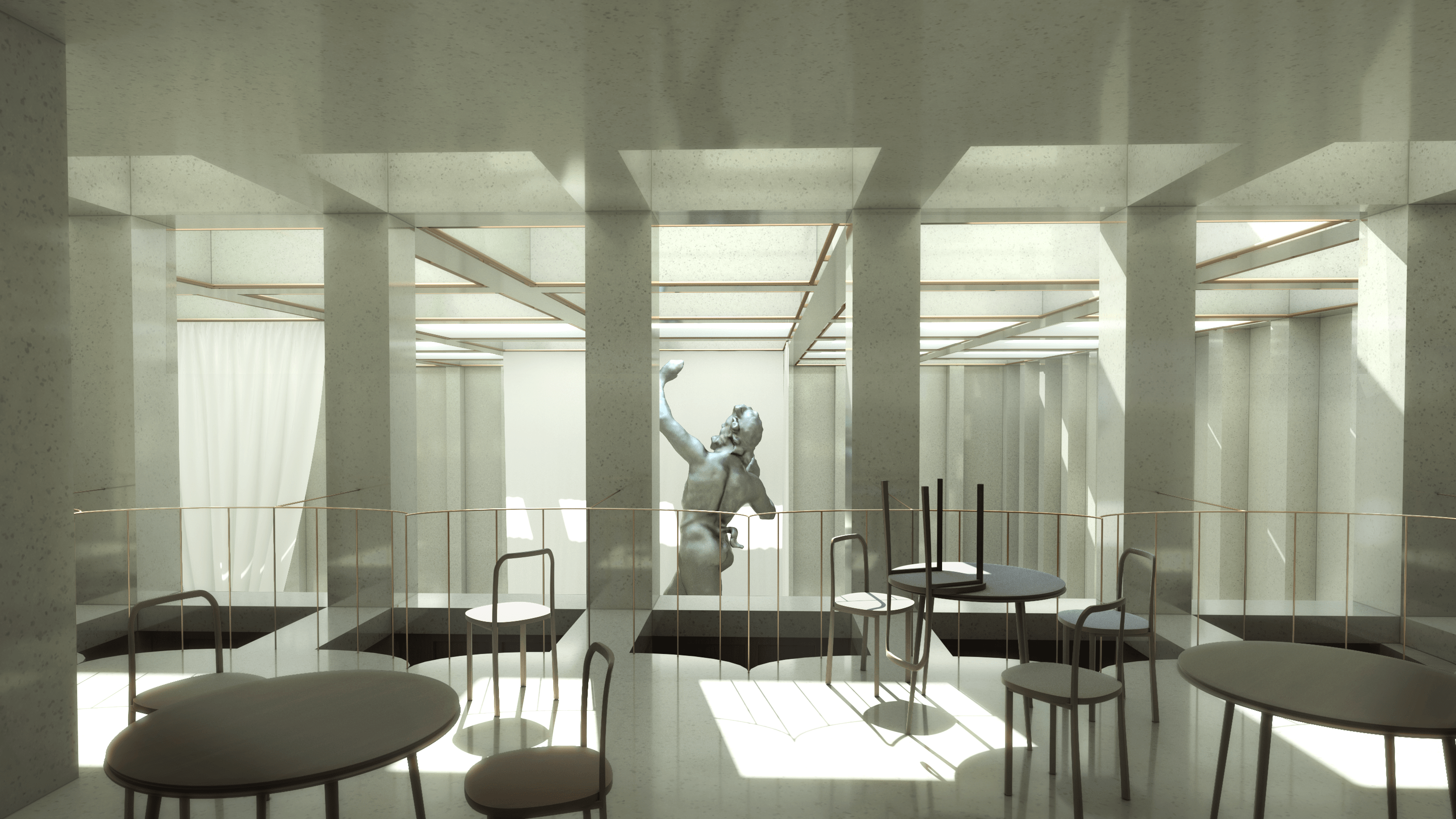 Back in the Annex, two monumental stairways flank the saloon, their stoic presence hints at the importance of what lies ahead. From the filtered light of the terrace, to the more intimate, ceiling lit, saloon, the stairways descend towards what is clearly the deepest part of the Annex. An endless array of columns define the vast foyer, small rays of light cut the heavy shadows, giving little information of what inhabits the space. Through its sheer emptiness it holds a latent desire to be occupied – from its fundamental function of gathering people to receptions and even exhibitions. Heavy wooden doors open and close, each time letting a bit of light escape into the foyer, this in turn allows for a small glimpse of what lies just beyond. 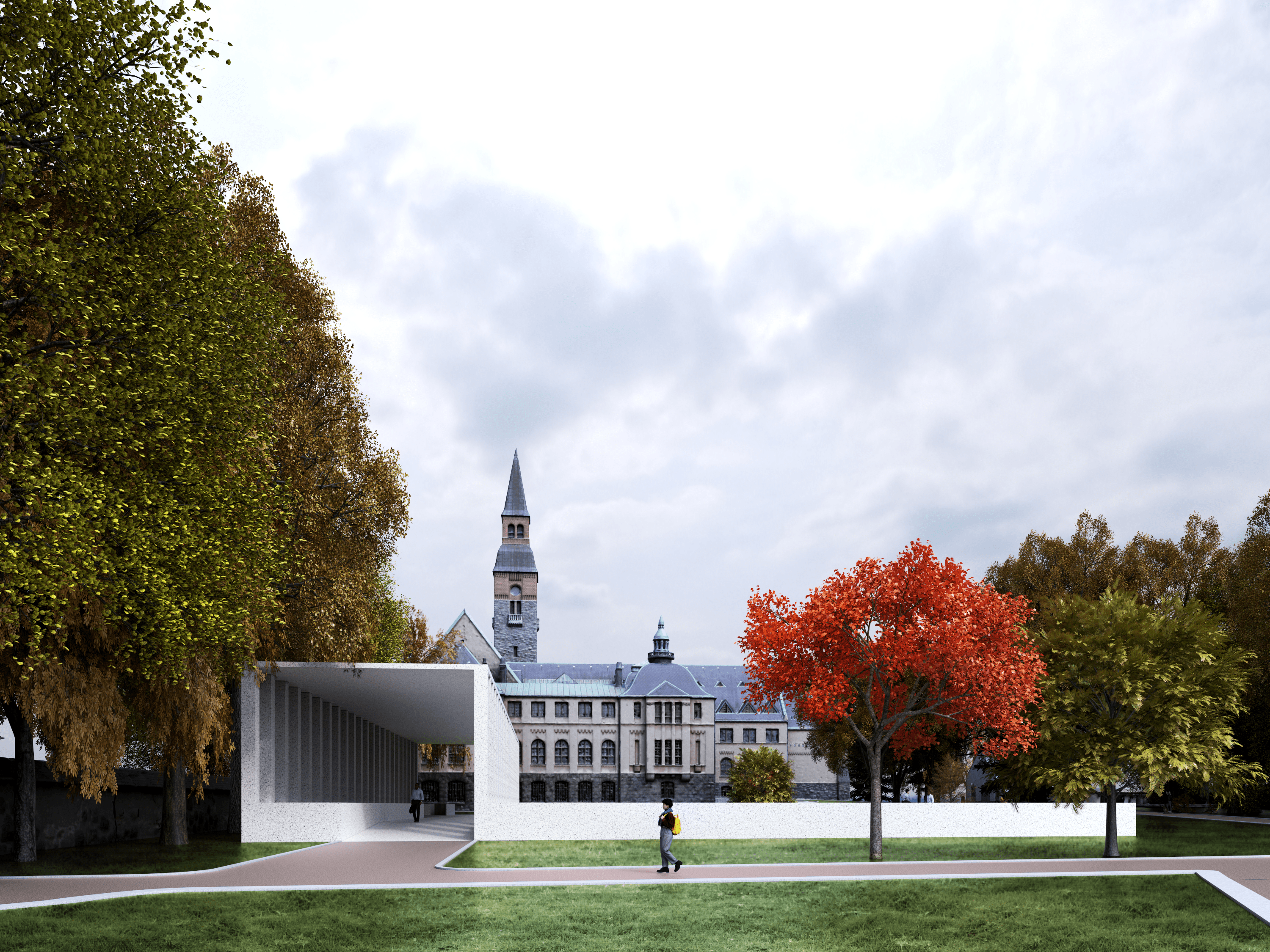 Once the formal invitation of a door opening is accepted, an overwhelming flash of light marks the entrance into the main chamber of the Annex, the Grand hall. An almost ritualistic repetition of robust columns borders a clear void which in turn reflects upon the aspiration of containment. A matrix of seemingly naive curtains mirrors this desire of endless compartmenting. They give the Grand hall the ability to expand and contract its space consistent with the use it needs to house (auditorium, exhibitions, theatre, cinema etc. ). They hang from an array of structural soffits, which transforms the ceiling into a flexible scaffolding for hanging props or even more permanent walls. They also provide the means of altering the light, by installing diffusers they can provide adequate lighting for a large range of exhibitions, it can even transform the Grand hall into a genuine “camera obscura”.

Massive in its size, the grand hall, generates an imaginary pull, trapping around it all of the annex’s functions. From hidden doors situated on the opposite wall of the wooden ones, and away from visitors eyes, the Grand hall communicates with its servant spaces (allowing the entrance of exhibition supplies, actors and facilitating technical requirements - if needed, a beam from the ceiling can detach and permit the entrance of massively sized objects). The Annex’s pedestal appearance, as seen from the park, is clearly governed by the centrifugal effect of the Grand hall’s dense emptiness. It aligns with the museum’s spatial structure, becoming not only it’s extension but also a coherent architectural statement, an active witness to Kansallismuseo’s posterity.